Week 3 of Great British Bake Off 2015 was ‘Bread Week’ with the contestants starting off with a Soda Bread, before moving onto the technical baguette and then the more elaborate show-stoppers! 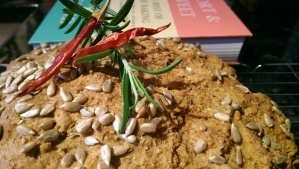 So naturally I started off with the easiest option of soda bread. Not a bred I’ve made before so I turned to my trusty ‘bread book’ Short and Sweet by Dan Lepard for inspiration. This cook book doesn’t have a huge amount of photos but more than makes up for this with tonnes of recipes! I once saw Dan Lepard showcasing his bread making techniques at a food festival so have admired his bread making since. An Aussie version of Paul Hollywood!

The basis of this recipe is Dan Lepard’s ‘Breakfast Soda Breads‘ which recommends putting together the ‘dry’ ingredients and storing them for when you want to bake up some fresh rolls. Not a bad idea since I often struggle to eat bread before it starts to go stale. However this time I wanted to bake a whole loaf so I used the same basic recipe but added used some rosemary from my kitchen garden, then threw in some cayenne and chilli flakes for a bit of a kick! I also topped the loaf with some sunflowers seeds because they were closer than the rolled oats.

The great thing about baking this soda bread is that there is no kneading and proofing involved, so it’s really a quick bread!

For ease of reference, I’ve copied the recipe below:

For the dry mix

For every 75g of dry mix (per bread roll)

I baked this loaf twice as the first time it was slightly under-baked in the middle, as I didn’t slash the loaf in the middle. The second time I baked it I added some extra rosemary and reduced the amount of salt but felt that the flavour of the first loaf was better. I think I’ll try other soda bread recipes to see how they compare! 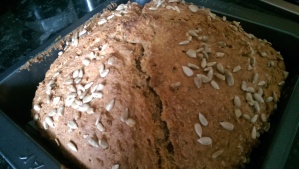 In another ‘Short and Sweet’ recipe for ‘Ale House Rolls’ he suggests part baking the rolls before freezing them then baking them from frozen for 10-12 minutes when required. I like this idea and reckon it would work with any breads! Worth a try…