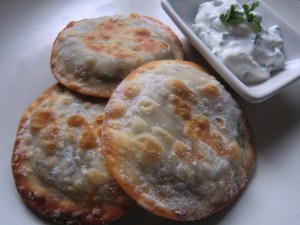 I have previously posted about ‘Aushak and Bolani‘- what I know to be traditional Afghan dishes. Aushak are a vegetable filled dumpling, usually using green onions or leeks, and Bolani are a stuffed flat bread (usually vegetarian too).

These dishes are a little time consuming to make, especially if you are making the dough yourself, so I cheat by buying frozen dumpling wrappers from the Chinese supermarket! There are local Afghan restaurants that sell these dishes but they are quite expensive, for what is basically vegetables wrapped in dough! So I usually make them at home, having a stock in the freezer for when the taste buds are calling… 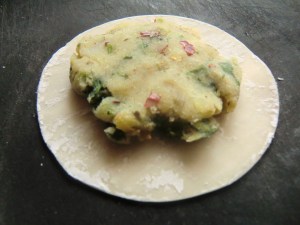 Bolani Wrapping- seal with some water around the edges. The filling is cooked mashed potato, green onions and spinach with chilli flakes and ground spices 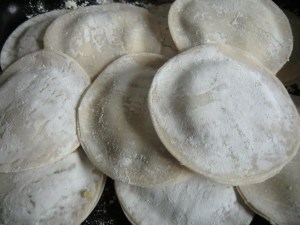 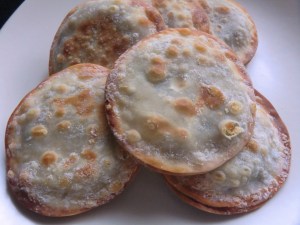 Bolani: sprayed with vegetable oil and baked in a hot oven for 10 minutes on each side

Bolani are more traditionally pan fried in oil and soak up quite a lot of oil in the process. By spritzing the Bolani on both sides with a spray oil, it is much healthier and the dough gets nice and crunchy around the edges. By using these dumpling wrappers, they are also ideal for a small starter or snacks for guests. Less messy that larger flat breads too… Serve with whatever chutney or sauce you fancy!

Aushak- lined up ready for the freezer

Aushak can be served either steamed or boiled, with a lentil or ground meat based sauce. I didn’t get a picture of the cooked result this time though…

This post is dedicated to everyone who is celebrating Chinese New Year on 31st January 2014! I invited some friends over for a celebratory meal and got a little stuck on what to cook. So I bought a Gressingham Duck crown at the supermarket and this is what I came up with… 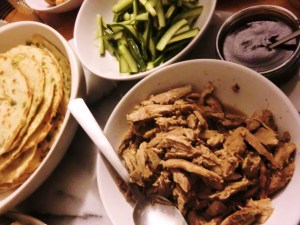 Most people will be familiar with deep fried crispy from Cantonese Restaurants all over the world. Deep fried crispy duck is usually made up of shredded duck meat, ‘hoi sin’ sauce, and thinly sliced cucumber and spring onions, all wrapped in a thin wheat pancake. This recipe takes inspiration from this dish but uses other traditional Chinese cooking methods and some of the same flavours. This is a fairly long post, so please stay with me, it’s worth it! 🙂

For the duck, I loosely based the cooking on this recipe for Teochew Braised Duck (Lo Ack/滷鸭) but used a few different ingredients as I didn’t have all of the stated ones. Here’s approximately what I used:

The method I used was the same as the recipe. However as I cooked it the day before, I left the duck in the braising stock over night in the fridge for extra flavour!

For the pickled cucumber, I drew inspiration once more from one of my favourite cooks, Christine Ho who is my ‘go-to’ cook for Chinese food inspiration. Her recipe for ‘Sweet and Sour Cucumber’ sounded ideal for this dish. I pretty much followed the recipe exactly, although I used one large cucumber so kind of guessed the quantities of the vinegar and sugar! (I used white wine vinegar because that was what I saw in the cupboard first!) 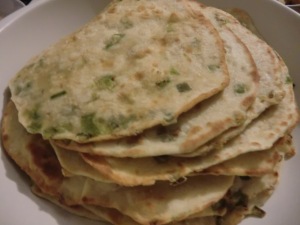 For the Spring Onion Pancakes, again Christine Ho came to the rescue! These ‘pancakes’ are not the fluffy kind that are usually served for breakfast. Think of them as the Chinese version of a pan-fried flat bread. The dough becomes is flaky and crisp whilst the spring onions give them a subtle ‘oniony’ flavour.  I’ve never made these before but have eaten loads of my mum’s ones before. My mum uses lard in her recipe, as with a lot of Chinese recipes but Christine’s ‘Scallion Pancakes‘ don’t call for it, so I wasn’t too sure how they would turn out…

I followed the recipe but as I wanted to be able to use the pancakes to wrap up the duck meat, I decided to go for much thinner versions. these turned out fairly well but not as flaky as the usually thicker spring onion pancakes. I used ready made hoi sin sauce as I wasn’t even going to attempt it myself! 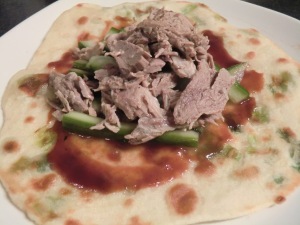 Although this dish is time consuming to make due to all the different elements, it is fairly satisfying to roll up these tasty morsels and enjoy them with friends for this special occasion.

The duck was moist and full of flavour, the pickled cucumber was great for refreshing the palate and the spring onion pancakes were crisp enough to add a little crunch but still pliable enough to roll up. Delicious! 🙂

Like ‘dumplings’ stuffed flat breads can be found in variations the world over. Thinking about it, both dumplings and flat breads are similar in that they are both a form of dough with a filling inside then just cooked in different ways!

Today I had a little more time to cook up something tasty for brunch. With a kilo of King Edward potatoes to use up I decided to make some Bolani. Bolani is a vegan flat bread found in Afghanistan that is pan fried with a think layer of vegetable based filling. It is one of the first Afghan dishes that my partner made for me when we first got together. When he made it, he was guessing a lot of the ingredients and the cooking method based on when he watched his mum make them at home. Being a man in the house, he didn’t get involved in the cooking so he did it from memory. It tasted exactly like the Aloo Paratha that my good friend from university would make for me, except he used plain white flour to make the dough and she would use chapatti flour. Also Bolani are usually folded in half and paratha are usually kept in a round shape. Both were pan fried in oil or ghee and tasted delicious!

I’ve also encountered stuffed chapatti in Uganda during my travels in my gap year. These were the university student’s staple food at the end of the semester when funds were low and studying for exams meant that there was no time for cooking. ‘Rolex’ do not refer to the watches that we see advertised in glossy magazines, but to chapattis that are cooked and ‘rolled in eggs’ (‘roll-eggs’). The eggs are usually cooked with some thinly sliced tomatoes, onions or cabbage into a thin omelette then a panfried chapatti is laid onto and the two cooked together and rolled up to eat. I’ve made these at home on occasion using ready to eat wheat tortilla wraps and they have turned out pretty good!

I had the Turkish version of this street food snack at a food market earlier this year and watched in amazement as the stall holder deftly rolled out the dough into the thinnest, most delicate, strudel like layer. They were called Gozleme and the resulting flat bread was flaky and not too oily. Rather than adding oil to the pan as with paratha and bolani, she pan fried them in a dry pan then brushed oil onto each side of the bread as she flipped it over.

Learning from all these different ways of cooking stuffed flat breads from all over the world, I have settled on my own preferred recipe for making these delicious potato stuffed flat breads. I like to mix both white flour and wholemeal for the flavour. I also like to add oil to the dough recipe as I find it results in a much flakier bread and you can use less oil in the pan frying to get a lighter finish. This is the ‘recipe’ I used today (with rough estimates of amounts as I didn’t measure anything out!):

Ingredients for the dough

The great thing about stuffed flat breads is that they can be stuffed with anything! They make the ideal street food snack and a great way to use up left overs at home.  When watching other people make these, they always seem so quick to make, but it always takes me a couple of hours to make everything from scratch so using ready made chapatti or tortilla wraps is a great short cut when you are short on time!